Medical Device market in Brazil is highly dependent on imports of highly complex technical equipment wherein the currency exchange fluctuations may decline the profit margins of the manufacturers in the country.

Moreover, in 1990, the Brazilian government also installed its free Universal health system (SUS) for the Brazilian population which increased the number of people going to hospitals for required consultations and surgeries. The Medical Device Market in Brazil is at a growing stage, owing to the presence of many international manufacturers in the country. The industry is booming with the Universal Health System (SUS), the growing elderly population (Above 65 Years) and growing investment in R&D for the manufacturing of new equipment in Brazil.

The reported number of death cases due to cardiovascular disease and cancer accounted for the highest percentage share of ~% and ~% respectively in the proportion of total mortality due to different diseases in the year 2016. 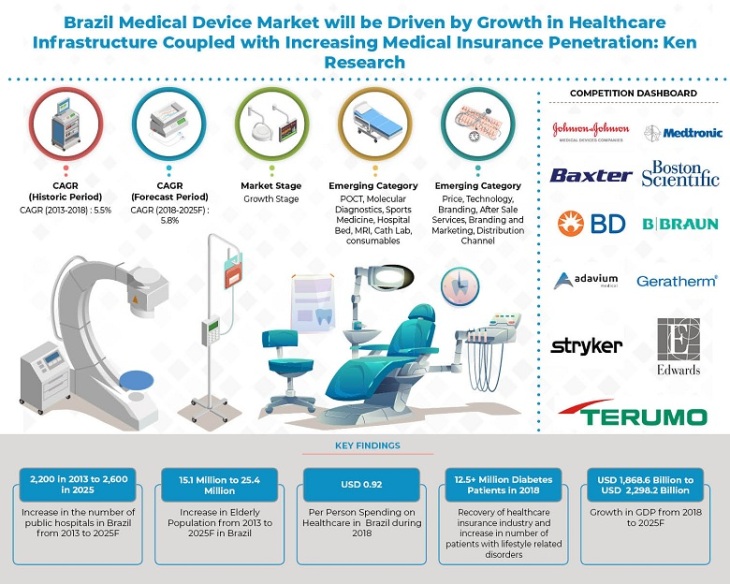 Growth in the Medical devices market was affected by the 2015 economic crisis as unemployment in Brazil led to a number of uninsured people in Brazil. This further became a reason for people not going with healthcare services in Brazil.  However, the economy is recovering.

By Mode of Selling

By Type of Device

Reagents for In-Vitro Diagnostics accounted for the highest percentage share of ~% during the year 2018 due to the growing interest of the Brazilian prenatal screening and molecular testing technologies. Materials and Supplies which include Syringes, needles, catheters, bandages, dressings, suturing Materials have accounted for ~% of Brazil’s medical device market share in 2018.

Hospitals in Brazil accounted for the highest percentage share of ~% in the year 2018 largely due to the presence of a number of hospitals and the volume being demanded by different departments in the Hospitals. Clinics and Diagnostic labs accounted for ~% share in terms of revenue in 2018, as an only specific set of medical devices are used for the examination purposes at the laboratories.

Southeast Region in Brazil accounted for the highest revenue share of ~% in 2018 largely due to the number of hospitals and diagnostic labs in that region. In 2018, the South region is the second-highest region with a ~% share in terms of revenue followed by South, Midwest, and North.

How Is The Competitive Landscape Of Medical Devices Market In Brazil?

Medical Device Market in Brazil is moderately fragmented with domestic and international players wherein the less complicated devices are manufactured in Brazil and high complex devices are largely imported.

The companies in Brazil are operating in different business segments with more focus on indirect sales channels so as to cater to larger target audiences.

Brazil Medical Device revenue is anticipated to increase from USD ~ billion in 2018 to USD ~ billion by the year ending 2025 at a CAGR of ~ % during the period 2018-2025F with respect to multiple factors that include growing per capita health expenditure, improving insurance penetration, a growing aging population, rising investment in R&D activities, technology, and product development, advancements in connectivity, growth in healthcare mobile applications and improvements in Universal healthcare system (SUS) in Brazil. Increasing government health expenditure coupled with the growing number of chronic diseases including HIV and cancer will drive the demand medical device in the near future in Brazil.

By Type of Device

By Type of End User

Diagnostic Lab Centers and Others

Key Topics Covered in the Report:-

For More Information On The Research Report, Refer To Below Link:-