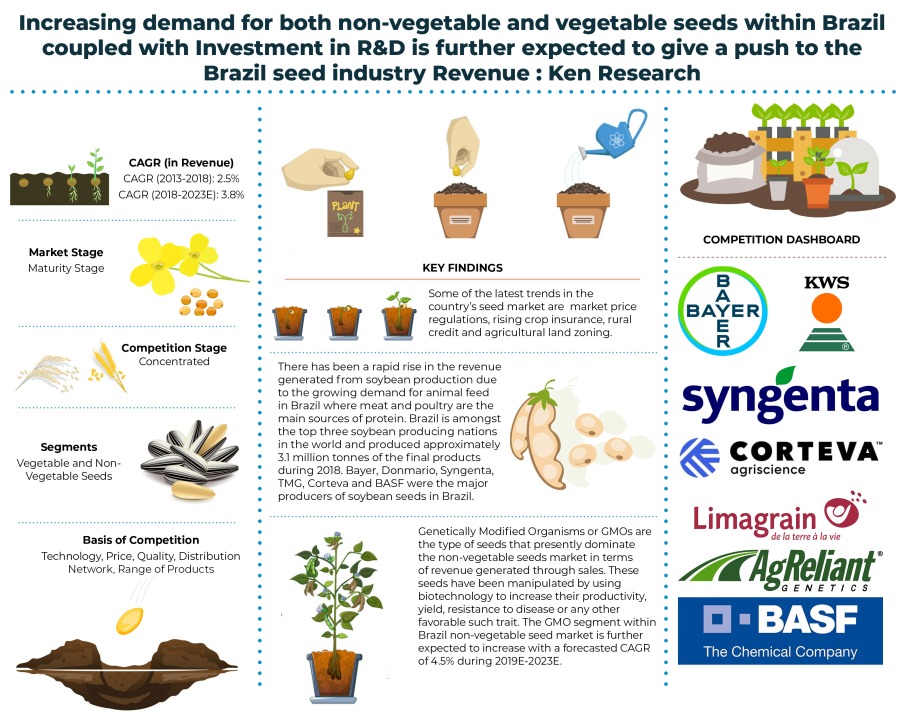 The report titled “Brazil Seed Market Outlook to 2023 – By GMO Seeds, Hybrid Seeds and Open-pollinated Seeds, By Vegetable (Tomato Seeds, Watermelon and Other Melon Seeds, Onion Seeds, Potato Seeds and Chili Seeds and Others) and Non-Vegetable Seeds (Soybean Seeds, Corn Seeds, Cotton Seeds and Others); and By Region” provides a comprehensive analysis of the seed industry in Brazil. The report covers various aspects including introduction of Latin America seed industry and Brazil seed market, value chain analysis, market size by revenue and production volume, overall Brazil seed market segmentation by type of seeds, by international and domestic players; and by region; comparative landscape, trends and developments, issues and challenges, SWOT analysis and regulatory framework of the industry. The report concludes with market projections for future and analyst recommendations highlighting major opportunities and cautions for the Brazil seed industry. 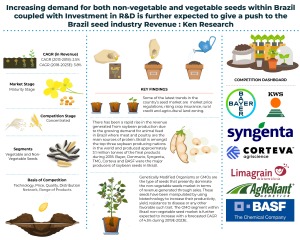 Steady growth was observed in Brazilian agriculture majorly due to increased levels of production and exporting of crops such as soybean, sugarcane, wheat and corn, among others. In addition to that, technological advancement and improved seeds have played a key role in increasing productivity and agricultural development. In Brazil, a dynamic seed industry is evident with the participation of the both private and state sectors in R&D through the Brazilian Agricultural Research Corporation (EMBRAPA). The country is one of the largest agricultural exporters with agro-food exports accounting for 38.5% of the total exports value, compared with 7.3% across all countries in the year 2018. Seed market within Brazil was observed to grow at a positive CAGR both in terms of revenue and production volume during the review period of 5 years 2013-2018.

By International and Domestic Players: Numerous companies have international profiles and seek to exploit the Brazilian seed market. This is often done so that the international companies acquire local companies thus, leading to a higher share in the year 2018. One of the great advantages of Brazil as compared to other developing countries is the existence of several different research institutions in the agricultural and human health sectors, qualified to act as vectors for the development of modern biotechnology such as EMBRAPA. Hence, foreign companies find it easy to acquire or merge with already established companies in order to reduce the administration and transaction costs in Brazil.

By Type of Seeds (Vegetable and Non-Vegetable Seeds): Vegetable seeds include crops such as bitter gourd, cabbage, radish, cucumber, eggplant, hot pepper, leafy vegetables, onion, papaya, carrot, okra, pumpkin, ridge gourd, patola, sitao, snap bean, sweet corn, sweet pepper, tomato and watermelon. The market includes the domestic sales of locally produced seeds and imported seeds. In 2018, the major non-vegetable seeds being sold in Brazil were Soybean and Cotton. The industry offers different hybrids to farmers and helps them to achieve better productivity, now with lesser water. Thus, farmers can plant crops even when they may be facing situations such as drought or other similar conditions.

By Type of Vegetable Crop (Tomato Seeds, Watermelon and Other Melon Seeds, Onion Seeds, Potato Seeds, Chili Seeds and Others): Tomatoes in Brazil are processed into a wide variety of products including paste, pulp and other more specialized sauces. The segment has been growing at a positive CAGR and is majorly produced in Sao Paulo, Minas Gerais and Goiás and other Central regions of Brazil. The remaining market share was collectively captured by watermelon, melon, onion, potato, chili seeds and others during the year 2018.

By Type of Technology (Hybrid and Open Pollinated) in Vegetable Seeds: Hybrid vegetable seeds have dominated in terms of revenue, generated by market players from the sales of various kinds of vegetable crop seeds in Brazil during 2018. Farmers generally prefer hybrid seed owing to better yield, higher resistance to diseases and various other features. Additionally, it was observed that major seed manufacturing companies are focusing on hybrid seeds in Brazil. The remaining market share was captured by open pollinated seeds in 2018.

By Type of Non-Vegetable Seeds (Soybean Seeds, Corn Seeds, Cotton Seeds and Others): Soybean seed segment dominated Brazil non-vegetable seed industry as the country was observed amongst the top three soybean producing nations in the world and produced 3.1 million tons during 2018. Bayer, Donmario, Syngenta, TMG, Corteva and BASF were the major producers of soybean seeds in Brazil. The remaining market share was captured by corn seeds, cotton seeds and others during 2018.

By Type of Technology (GMO, Hybrid and Open Pollinated Seeds) in Non-Vegetable Seeds: GMOs are the type of seeds that currently dominate the non-vegetable seeds market within Brazil in terms of revenue. These seeds have been manipulated by using bio-technology in order to increase their productivity, yield, resistance to disease or any other favorable such trait. The remaining market was collectively captured by other segments.

Competition stage within the Brazil Seeds market was observed to be concentrated along with the presence of both international as well as domestic players, where the international segment had larger revenue share during the year 2018. There are multiples players (including foreign and domestic/local) operating within the country as of 2018. Competition prevailing in the market was primarily due to providing almost similar types of seeds by multiple players. Other parameters on the basis of which companies compete in the Brazil seed industry include technology, price, quality, distribution network, range of products and others.

The demand for seeds within Brazil is further expected to be driven primarily by the strategies of different international companies who are planning to expand their market share in Brazil during the forecast period 2019E-2023E. The emphasis on innovation, research and development through heavy investment especially in the crops of corn, soybean, tomato, melon, chili, onions and other major vegetable and non-vegetable crops is anticipated to support the revenues of the players offering seeds for producing crops in the Brazil region. Larger players cater to the growing requirements of farmers with improved qualities of GM, hybrid and open-pollinated seeds. The market in Brazil is also expected to gain consolidation as a number of mergers and acquisitions are taking place between large players in the country and abroad. The proportionate share of domestic players is further expected to decline, owing to rising numbers of farmers shifting to the use of branded seeds with improved quality to get better yield, which is usually provided by international / global players.

By International and Domestic Players

By Type of Seed

By Type of Vegetable Crop

Watermelon and Other Melon Seeds

By Type of Technology in Vegetable Seeds

By Type of Non-Vegetable Seeds

By Type of Technology in Non-Vegetable Seeds

Key Topics Covered in the Report

For more information on the research report, refer to below link:

US Seed Market Outlook to 2023 – By Type of Seed (Corn, Soybean, Cotton, Wheat, Sorghum, and Vegetables) and By Technology (GM/GE/Hybrid and Open Pollinated)

Indonesia Seed Market by Types of Seeds (Fruits and Vegetables Seeds, Grains and Cereals Seeds and Plantation Crops Seeds), by Hybrid Seeds and Non-hybrid Seeds, by Organized and Unorganized Players, by Farmer Saved and Commercial Seeds – Outlook to 2021