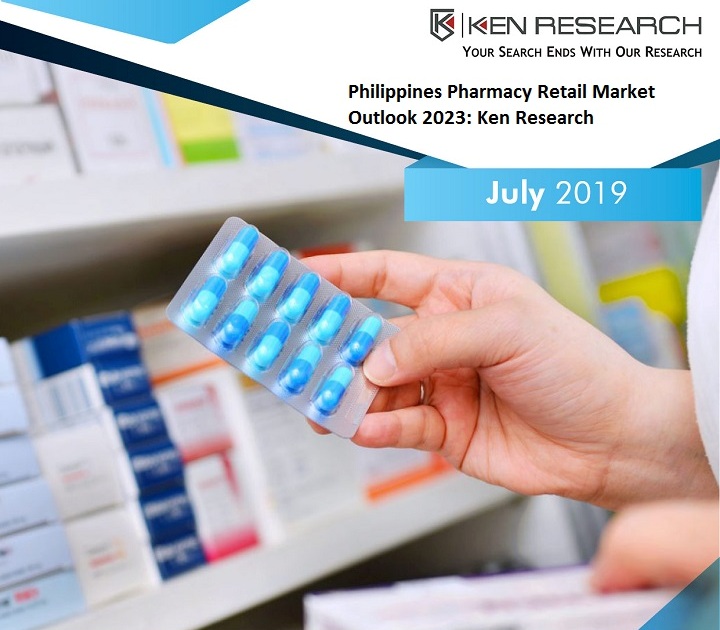 The market is currently at the growth stage and the revenues generated by the Pharmacy Retail in the Philippines was evaluated at PHP ~ billion during 2018, inclining from PHP ~ billion in 2013. The organized pharmacy chains are playing an important role in the development of pharmaceuticals market by introducing new store formats and customer friendly services. These stores are providing various other services such as medical consultation, counseling, health check-ups and others in addition to the product offerings. The chains are present in most of the regions in the Philippines prominently in the Manila, Luzon, Visayas and Mindanao region. The demand is facilitated on the basis of prescription medicines as the customers prefer to purchase medicines prescribed by the doctor.

Demand for OTC products is growing in the country as the medical awareness and health knowledge is increasing among the consumers. The pharmacy stores stock a wide range of non pharmaceutical products which includes personal care products, daily living needs and FMCG products. These companies are partnering with the pharmacy chains as the chains have developed a good distribution network in the different regions of the Philippines, which the supermarkets and hypermarkets currently lack. The industry registered a CAGR of ~% for the period 2013-2018. It is estimated that the market will grow at a CAGR of ~% in the period 2018-2023.

By Type of Market Structure (Organized and Unorganized Market: Philippines pharmacy retail market was dominated by the organized segment as these chains have established a good relation with the customers on the basis of the store convenience and different customer loyalty schemes. On the other hand, unorganized segment is mostly prevalent in the countryside and rural areas where the organized chains are not present.

By Type of Store Location (Standalone and Hospital Based Stores): The standalone stores are able to generate greater revenue than the hospital based stores as most of the patients prefer to purchase from the standalone stores due to their cost efficiency. In addition to that, standalone stores maintain a wide range of non pharmaceutical products which increases the store footfall.

By Region: (North, Central and South): Northern region constitutes National Capital Region and Central Luzon. Pharma sales are most in the North as the NCR region over there has the most per capita GDP in the country during. The remaining market share was collectively captured by central and south region.

By Type of Sales (Prescribed Medicines, Over the Counter Products, Non Pharma Products and Medical Equipment):

Sales towards prescribed medicines were observed to dominate Philippines pharmacy retail market during the year 2018. The demand is majorly facilitated by the sales happening in the hospital based stores and standalone stores near a hospital. This was followed by the OTC products, Non Pharmaceutical Products and medical equipment.

The Philippines pharmacy market has different group of therapeutic drug classes such as anti-infective, cardiovascular, gastro intestinal, anti diabetic, vitamins, minerals and nutrients, respiratory, pain analgesics, dermatology, neuro, gynecological and others. The market has most demand for the cardiovascular drugs due to high rate of Coronary Heart Diseases (CHD) in the country.

WHAT IS THE COMPETITION SCENARIO in the Philippines pharmacy retail market?

Majority of the unorganzied players lack the resources in comparision to the organized players and therefore aren’t able to compete with them. The major competition parameters for the different players are:

Pricing of the Medicines

Location and Number of Stores

The promotion techniques used and others

The majority of the organized pharmacy chains have limited their presence to the developed regions and are available in the major regions and provinces. They need to increase their store presence in the semi-urban and rural areas in order to increase their market penetration in those regions. The adoption of franchise model by some chains is good for this as those chains are expanding rapidly in the region and have been able to establish their presence in the market over a short period of time.

WHAT is the FUTURE Outlook for the Philippines pharmacy retail market?

Over the forecast period, the Philippines pharmacy retail market is expected to register a positive CAGR in terms of revenue during the forecast period 2019-2023, driven on the expected growth in the total number of organized stores in the country. The organized chains are expected to include the online sales channel in their distribution system and adopt the omni sales channel strategy. As the medicine market is being dominated by the demand for generic medicines, total number of drugstores providing generic medicines are expected to increase in the near future. The government of Philippines has revived the Botika Ng Bayan initiative which used to provide the medicines in the Philippines at subsidized rates. The government of Philippines aims to expand it to each of the barangay (village) in the Philippines and provide generic medicines in order to reduce the healthcare costs.

By Type of Drug

Existing Pharmaceutical Retailers in the Philippines

Existing Pharmaceutical Distributors in the Philippines

Existing Pharmaceutical Wholesalers in the Philippines

Existing Pharmaceutical Manufacturers in the Philippines

Existing Pharmaceutical Importer in the Philippines

Key Topics Covered in the Reports

Business Model for a Retail Pharmacy Store in the Philippines

Issues and Challenges in the Philippines Pharmacy Retail Market

For more information on the research report, refer to below link:

Germany Retail Pharmacy Market Outlook to 2023 – By Type of Pharmaceuticals (Prescription Only, Pharmacy-Only, Supplementary Products and Unrestricted OTC pharmaceuticals); By Number of Main and Franchise Pharmacies; and By Federal States; By Online Sales

Kuwait Retail Pharmacy Market Outlook to 2022 – By Type of Pharmacy (Pharmacy Chains, Independent Pharmacies and Hospital/Clinic Based Pharmacies); By Type of Drugs (Cosmetics, Food Supplements and Drugs), By Type of Sales Channels (Offline and Online)

India Online and Offline Pharmacy Retail Market Outlook to 2025 – By Organized and Unorganized; By Standalone and Hospital based Pharmacy; By Product Category (Prescribed Drugs, OTC Drugs and Non-Pharmaceutical Goods) and Therapeutic Class