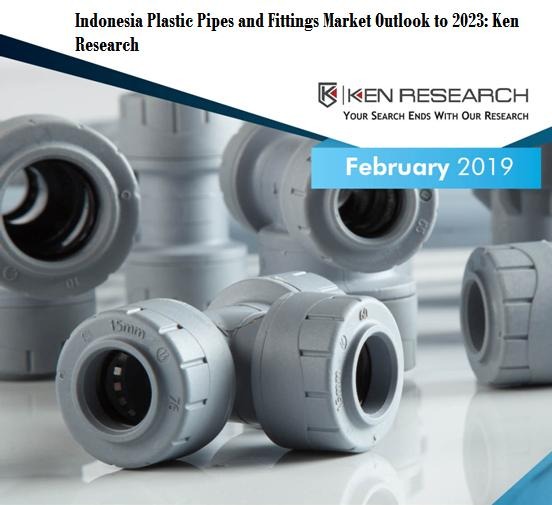 The companies that dominate the Indonesia Plastic Pipes and Fittings Market at present were established in the 1970s. The market is currently in its growth stage with the major companies competing for a share in the market revenue. The domestic and foreign players in the market compete on the basis of price, product line, and product quality. The existing companies are considering mergers and acquisitions in addition to expanding their product line. The market is primarily growing due to heavy investments by the public and the private sector in housing facilities and infrastructure. Moreover, the Government is focusing on improvising the irrigation and water supply channels. The use of plastic pipes has replaced the demand for steel and iron pipes for a variety of purposes. The Indonesia Plastic Pipes and Fittings Market grew from USD ~ Million in 2012 to USD ~ Million in 2018(P) and recorded a single digit CAGR of ~ % during the same period.

The population of Indonesia is steadily rising and a large proportion of it depends on agriculture for livelihood; therefore the Government has been focusing on improving the water supply channels and irrigation facilities. In addition, the residential projects are at a rise in the economy. Awareness amongst person has encouraged the demand for improvised sewerage systems and sanitation facilities. Furthermore, the Government has been making heavy investments in advancing the infrastructure in Indonesia.

How Is The Indonesia Plastic Pipes And Fittings Market Segmented?

By Type of Plastic Pipe

PVC pipes are the most widely used plastic pipes as they are easy to install, light, durable and are preferred over their steel counterparts for most purposes. The PE market constitutes about ~% of the market share on the basis of sales volume and is commonly used in water supply and drainage lines due to their crack resistance and immunity from corrosion. The other types of plastic pipes have a market share of ~% on the basis of sales volume.

The most commonly used PVC pipes are UPVC pipes as they are safer than other PVC variants and provide the highest flow rate for water and sewerage supply. CPVC pipes are used for the transportation of liquids including chemicals such as acids, bases, and salts due to their greater temperature threshold and chemical resistance. PVC-O pipes are relatively new in the market and offer lower material needs and higher energy efficiency.

By Types of PE Pipes

HDPE pipes accounted for the market share of ~% in terms of the sales volume. In 2018(P), the total sales volume of HDPE was ~ Thousand Tonnes. They are ductile, fatigue resistant and provide leak-free joints. Moreover, the pipes are designed to tolerate sporadic surges that occur in the water distribution system.

MDPE pipes are widely used for purposes such as the distribution of water, petrol, and natural gases and accounted for a share of ~% in 2018(P) in terms of sales volume. They are very stable at room temperature and provide excellent chemical resistance. They are mainly used for gas pipelines.

LDPE and LLDPE accounted for the remaining share of the market which is ~% in terms of sales volume in the year 2018(P). LDPE and LLDPE pipes offer excellent electrical properties and have a high thermal expansion and do not operate efficiently under mechanical and thermal stress. LDPE is most commonly used for electrical insulation and film packaging.

The market revenue generated by the water supply and irrigation end-user segment in Indonesia stood at USD ~ Million in 2018(P). As the population is rising, the public and the private sector have been heavily investing in the residential sector. Moreover, the Government has also been improving the sewerage and drainage channels in the economy. The market share of sewage applications in the Indonesia Plastic Pipes and Fittings Market is ~% on the basis of the revenue generated. The segment recorded revenue of USD ~ Million in 2018(P). The remaining market share has catered by the end users such as Mining (Transportation of Slurry) ~%, Cable Protection (Conduit) ~% and Others (Gas, Telecommunication, Fire Safety Equipments, and Others) ~%, in terms of revenue respectively in the year 2018(P).

How Is The Competitive Landscape In Indonesia Plastic Pipes And Fittings?

Indonesia Plastic pipes and fittings market is moderately fragmented in nature as out of all the companies operating in the market, six major companies (PT Wahana Duta Jaya Rucika, Vinilon Group, Maspion Kencana, PT Langgeng Makmur Industri Tbk., Unilon and Pralon) constitute a market share of around ~% by revenue and ~% by production capacity in 2017. Companies in the Indonesia Plastic pipes and fitting market compete on the basis of price, quality, diversification in the portfolio, production capacity, and relationship with stakeholders and certifications. In Indonesia Plastic Pipes and Fittings market, the majority of the companies are organized and they altogether contribute ~% share in the market, whereas left out share in the market is catered by unorganized players.

What Are The Future Outlook And Projections For Indonesia Plastic Pipes And Fittings Market?

The Indonesia Plastic Pipes and Fittings Market is expected to grow from USD ~ Million in 2018(P) to USD ~ Million in 2023E at a CAGR of ~% during the period 2018(P)-2023(E). The major contributor to the growth in the market is the surge in investment by the government and the private sector in infrastructure activities. The steadily rising population leads to a rise in demand for residential facilities that inevitably catalysis the demand for plastic pipes and fittings. With the increase in disposable income and awareness amongst people, the demand for quality products is also rising. There is also an expected shift from PVC pipes to PE pipes in the future for a variety of purposes such as irrigation, industrial disposal, ducting and more. Moreover, bioplastics are also expected to gain an appreciable share in the market in the coming future as these are safer than any other plastic variant and can easily be recycled.

Pipes and Fitting Industry in Indonesia

Time Period Captured in the Report:-

For More Information On The Research Report, Refer To Below Link:-

Saudi Arabia Plastic Pipes and Fittings Market Outlook to 2022 – By Type of Pipes (UPVC, PVC  and CPVC, PE and Others) and Type of End-Use Applications (Irrigation, Water Supply and  Sewage, Plumbing, Chemical and Oil and Others)

New Zealand Plastic Pipe and Fitting Market Outlook to 2023 – By PVC, PE, Others Plastic Pipes; By End-User Application (Plumbing and Civil, Agriculture, Mining and Industrial, Telecom and Electrical and Others)

India Plastic Pipes and Fittings Market Forecast to 2026 – By PVC Pipes (UPVC and CPVC Pipes), by Applications (Irrigation, Sewerage, Water Supply and Plumbing, and Borewell Application), by Organized and Unorganized Sector and by Regions