Contact centers were witnessed to dominate the Philippines IT-BPO market with a huge revenue share of ~% in the year 2018P, thereby catering to growing significance of providing omni-channel customer support. A contact center is nothing but an extension of call center with additional services such as VoIP Telephone services, Email, text chat, fax services and direct website interface. It was followed by segments including software development, transcription, animation and other BPOs who collectively captured a revenue share of ~% in the Philippines IT-BPO Market in the year 2018P.

By Export and Domestic Markets

The Philippines IT-BPO market was observed to be mildly fragmented with the presence of both international as well as domestic players, out of which the top ~ international players collectively captured ~% revenue share in the year 2012 whereas, the total revenues derived from all ~ international players were evaluated at PHP ~ billion. The sector’s demand for new jobs continues to grow year on year, benefitting from the lower operational costs and the high literacy rate of the Filipino workforce. Also, numerous IT parks and business hubs inside and outside of Metro Manila city are attracting MNCs to set up their shop in the Philippines.

Accenture operations within the Philippines dates back to the mid 1980’s when the company saw an opportunity to introduce IT to the country and hired Filipino talent to execute those technologies. The company established itself as market leader in terms of revenues by capturing ~% revenue share in the Philippines IT-BPO industry in the year 2014. In the BPO segment, Accenture operations scaled up to Gen 5 and Gen 6 BPO, thus offering advanced outsourcing and innovative solutions to its clients. In the Philippines, Convergys started with a single contact center in the Manila region which was opened in the year 2003. The Company is exclusively focused on helping other companies to find new ways thus, enhancing the value of their customer relationships and deliver consistent customer experiences across the globe. It was followed by other companies such as Convergys, JPMorgan, 24/7 Customer Philippines, Telephilippines Inc. and others. 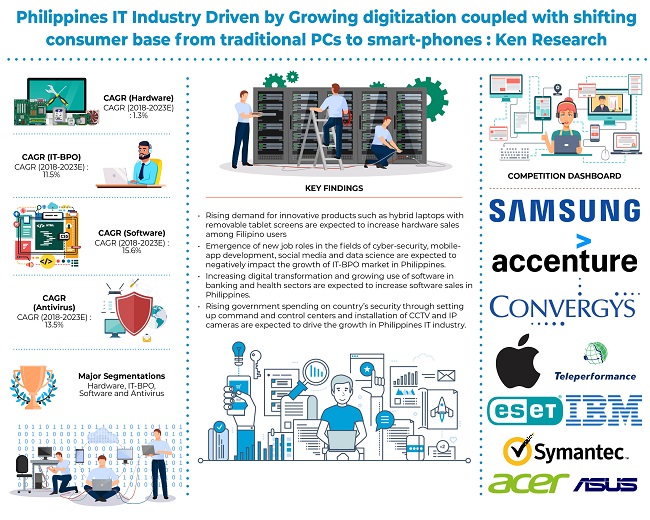 The BPO industry in the Philippines is expected to get influenced by emergence of AIS (Artificial Intelligence Systems) for instance, Al- powered translators which would affect the wide use of English in the country. The market revenues are further estimated to increase to PHP ~ billion by the year ending 2023E, thus showcasing a CAGR of ~% over the forecast period 2018P-2023E. Introduction of new job roles such as cyber-security, mobile app development, social media and data science mobile app development has reduced the country’s dependence on call centers. As a result, it may create a negative impact on the country’s IT-BPO industry in near future. Additionally, expansion of BPO hubs, especially in rural areas can turn out to be the next best thing in the Philippines.

How Philippines Software Market is Positioned?

Over the past few decades, software development in the Philippines has become one of the more established sub-sectors of the country’s IT and IT-ES industry along with the presence of both domestic and international firms who are capable of delivering services and products that match up with the rigid global standards. In accordance with the Philippines Software Industry Association (PSIA), there are approximately ~ software companies operating in the Philippines. In total, the overall industry has employed approximately ~ software developers. Additionally, they estimated that ~ million IT professionals doing consultancy work.

The Philippines remains one of the most cost competitive locations in the global IT industry and offers great potential for growth in software segment to foreign investors who are looking to invest, focusing on full-stack tech based digital solutions while the local niche players can work towards applications development and applications publishing in the Philippines. The Philippines overall software market revenues were witnessed to increase from PHP ~ billion in 2012 to PHP ~ billion in the year 2018P, thereby showcasing a five year CAGR of ~% during the review period 2012-2018P. Beyond contact centers, the Philippines have been gaining traction in the field of software development.

Over the past few years, the technology sector has also witnessed more robust IT counseling, thereby including implementation, deployment and Administration of IT systems In comparison to the other Southeast nations like China and India, critical factors that are adding momentum to the country’s software industry are its cultural and west-accent similarities especially with the US; cost competitiveness and good knowledge in terms of IT background, thereby proving to be a more useful resource. By taking advantage of large talent pool consisting of a large number of college-educated workforces, engineers and application based developers all across the nation; the Filipino government has opened regional centers in Metro Manila and other tier 2 & 3 cities in order to provide low-cost labor to firms based in Europe, North America and Australia. Major Players operating within the Philippines software industry are IBM, Accenture, Genpact; UST Global, Pointwest, Existglobal, Capgemini, HP and others.

By Software Development and Software Publishing

Software development segment within the Philippines was witnessed to dominate the country’s software industry with a massive revenue share of ~% in the year 2018P. Some of the major software developers and IT consulting firms in the Philippines include Accenture, Azeus Systems, RCG IT, IBM, SVI, SPI and others. These companies along with other local firms and subsidiaries of foreign development houses carry out business operations ranging from testing and software maintenance to app system development and systems analysis and design. Among software publishing in the Philippines, application based software have clearly dominated the market with a revenue share of ~%, thus evaluated at PHP ~ billion in the year 2018P. Gaming software development has been gaining traction in the country. On the other hand, system based software followed with ~% revenue share, thus evaluated at PHP ~ billion in 2018P among the country’s software publishing segment. The overall software publishing segment captured the remaining revenue share of ~% in 2018P.

Over the forecast period 2018P-2023E, the Philippines software market is expected to grow owing to increasing number of software-centric startups within the country. At present, there are about ~ startups in the country focusing towards software development. The market revenues are further expected to reach a total of PHP ~ billion by the year ending 2023E, thus showcasing a CAGR of ~%. Over the long term, the country’s software market will strive for a bigger share in the overall IT industry, as a result of which homegrown talents and techno-preneurs will get more significant opportunities to showcase their potential. Additionally it will further push Philippines into new areas of software services such as Robotics Process Automation (RPA) and Artificial Intelligence (AI).

How Philippines Antivirus Market is Positioned?

Virus protection software industry in the Philippines has come a long way in the past 30 years. Previously, infections were rare and malicious in nature whereas, post internet scenario saw increase in cyber-attacks. In retrospect, the early days of fighting a virus were old-fashioned as the first tools used towards tackling viruses were signature checkers that looked for changes in the file systems and applications that matched known patterns, and then flagged/blocked the programs from running.  Whereas now, the approach has shifted from traditional signature tools towards heuristic virus protection, using modern software that could detect the presence of virus and then remove it. Rising usage of internet has led to increase in the total number of financial transactions done online, for instance banking, shopping and multiple trading activities which have made it compulsory for big enterprises to opt for latest anti-virus solutions. Philippines anti-virus market was evaluated at PHP ~ million in the year 2012 which witnessed an increase to PHP ~ million in 2018P, thus growing at a five year CAGR of ~%. The growing concern of cyber security and prevention among virus attacks have led several Filipino companies to adopt for total security solutions consisting of internet security, anti-spyware, anti-malware, anti-virus and others. Antivirus software is an essential link to overall security chain, therefore protecting the end user’s computers from many viruses including worms and Trojan horses.

The emergence of mobile based platforms and cloud-based enterprise applications coupled with advanced technologies such as fingerprint identification and biometrics have forced users to install Smartphone protection for both android and IOS system using anti-virus solutions. Major Players and their Service Offerings: Some of the major players operating within the Philippines anti-virus industry space include Trend Micro, Symantec, Quick Heal, Eset, AVG and others. These players provide the latest security tools that scan the end user’s network, end points, and overall wire data and use big data analytics to find anomalies and then treat them accordingly. Major anti-virus players have also started to provide robust as well as affordable anti-virus solutions for a varied range of businesses in accordance with their needs and preferences.

By Enterprise and Retail Customer

The growth in the number of viruses coupled with the increasing speed at which they are spreading has led almost every business enterprise to opt for an effective anti-virus solution in the Philippines. For a well-established organization, time and money incurred towards recovering from a virus-attack can prove to be a more costly affair than purchasing anti-virus solution beforehand. In the year 2018P, enterprise segment dominated the Philippines anti-virus market with a massive share of ~% in terms of revenue whereas, the retail segment was witnessed to capture the remaining ~% revenue share in the Philippines antivirus market.

By Offline and Online Sales

The offline sales segment within Philippines was observed to dominate the country’s anti-virus market with massive revenue share of ~% in the year 2018P as major players in order to tap clients have set up multiple sales agents offline rather than waiting for customers to get online and then make the final purchase. Compared to the offline segment, the online sales of anti-virus solutions captured the remaining ~% revenue share in the Philippines in the year 2018P. Major online sales channel include E-commerce and advertisement websites.

Competition within the antivirus industry was witnessed to be moderately concentrated with the presence of limited number of players in Philippines. Some of the leading companies in this segment are international namely Trend Micro, Sophos, Norton McAfee, Symantec, Kaspersky Lab, Avast, ESET and others. However, domestic firms have also been emerging in this market. With fast evolving threat landscape in the Philippines, Anti-virus companies are gaining momentum in the country as more and more corporations are unable to manage their private documents. Majority of the business enterprises in the Philippines were observed to shift from traditional antivirus and blacklisting methods to latest upgraded anti-theft software. Also, Filipino companies increased their security spending in order to tackle the widespread issue of illegal cyber activities. These companies are offering multiple value added services such as total security; enter level security (anti-malware, anti-spyware and anti-virus) and internet security solutions.

Over the forecast period, Philippines antivirus market revenues are expected to take a hike to PHP ~ million by the year ending 2023E, therefore showcasing a CAGR of 13.2% from 2018P-2023E. Increasing number of cyber threats and illegal activities in the country will give a boost to the Philippines antivirus industry in the near future. Security spending over the long term will grow as more and more people are realizing the need to protect their respective assets against criminal activities. Externally, the country also continues to deal with terrorist activities, especially in the southern parts of the Philippines. On the other hand, internal thefts are forcing end users to look for security solutions in the country. The newly created Department of Information and Communications Technology (DICT) has developed a cyber-security plan to institutionalize the adoption and implementation of Information Security Governance and risk management approaches.