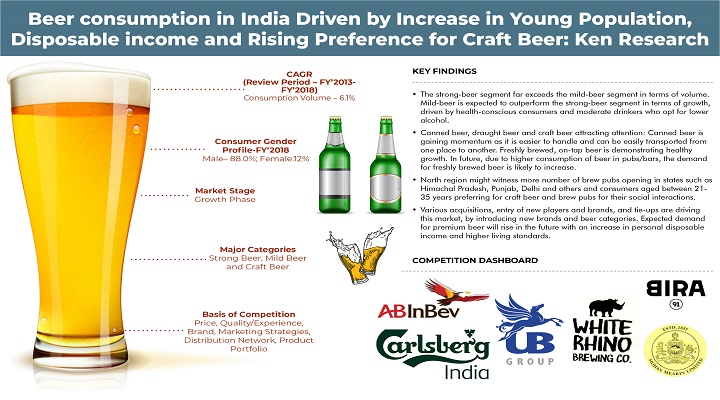 How beer market is positioned in india?

The beer market in India is at its growth stage with major companies in the market looking for further market expansion with introduction of new products and by strengthening their distribution network. The market has been growing majorly due to increase in number of youth population, higher disposable income, rising preference of consumers for low alcohol beverages and others. Drinking in bars is fast becoming a social phenomenon in cities such as Delhi, Mumbai and Bangalore and with emergence of craft beers, the growth in beer consumption increased rapidly. Besides the rising number of pubs and bars, another factor which increased beer consumption was increase in premium modern trade and on-premise outlets in metropolitan cities which increased the range of product availability and improved the retail environment. Some state governments, for instance Maharashtra, Uttar Pradesh and Kerala, offered separate licenses for beer sale further boosting growth prospects for the industry.

The beer industry has seen various merger and acquisition in India which has concentrated market competition, further and further during the last five years. For instance, acquisitions such as US-based Molson Coors Brewing Company acquiring Mount Shivalik Breweries (Thunderbolt beer manufacturer) in 2015, AB In Bev’s acquisition of SAB Miller in 2016 and so forth.

It is observed that Indian beer market is facing multiple obstacles which have influenced its growth potential, such as licensing restrictions, high taxes and advertising bans and these could be reasons for low beer consumption per capita in the country as compared to other regions in Asia Pacific region.

Over the review period, India beer market observed a healthy growth in consumption volume and grew at a CAGR of ~% between FY’2013-FY’2018.

Strong beer was witnessed to dominate India beer market during FY’2018 with a consumption volume share of ~%, thus evaluated at ~ million liters. The manufacturers of strong beer are trying to attract customers who normally drink country liquor and hard spirits. The remaining volume share of ~% was collectively captured by mild beer and craft beer in India beer market during FY’2018 which is slowly gaining traction in the country and looks as quite promising segments.

By Type of Consumer Gender (Male and Female)

Men have a greater share in the consumption pattern across India owing to higher consumption per capita among men compared to women, other reason is, in many regions, men are the only bread winners for their family and with much more financial independence, they have more financial capability to spend on their lifestyle choices as compared to women.

The southern and western regions in India were witnessed to dominate the country’s market with a collective volume share of ~% in FY’2018. The remaining ~% of volume share in India beer market was captured by northern and eastern states during FY’2018.

By Type of Distribution Channel (State/Government Corporations, Distributors and Retailers)

Owing to stricter regulations across various states in India, state/government corporations segment dominated with a massive volume share of ~% of the total sales volume of beer in India in FY’2018. It has been witnessed in the market that, L1 distributors would prefer to push the product which would give them better margins over others and therefore influenced consumption of some beer brands in some regions. The remaining ~% volume share in India was grabbed by the distributors and retailers network in FY’2018.