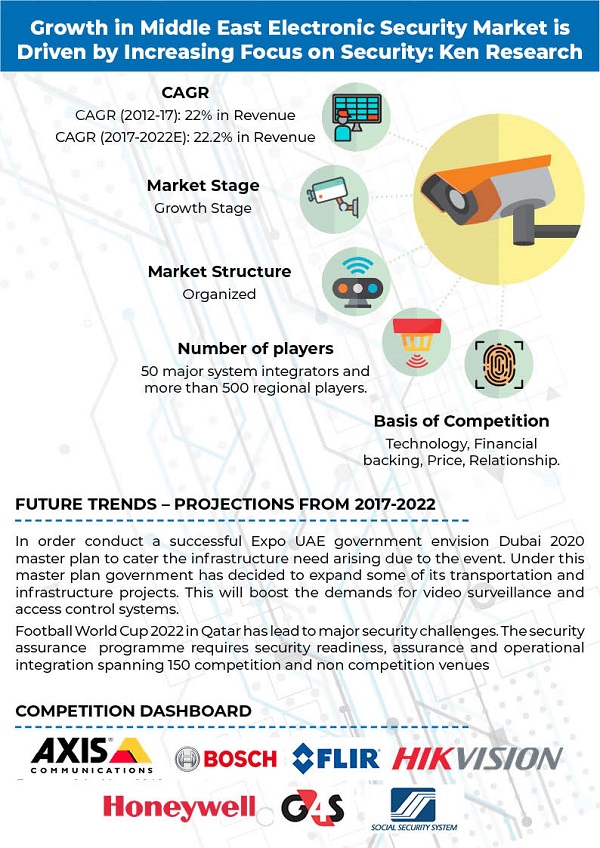 This report will help the readers to identify the ongoing trends in the industry and anticipated growth in future depending upon changing industry dynamics in coming years. The report is useful for system integrators, manufacturers, distributors, resellers, end users, government and potential entrants and other stakeholders to align their market centric strategies according to ongoing and expected trends in the future.

Electronic security industry in Middle East region is still in the growth stage and has registered positive a five year CAGR of during 2012-2017. The market size increased to almost USD 1 Billion. The growth was mainly driven by implementation and amendments of regulatory compliance to use the electronic security by the government due to increasing security concerns. Technological innovations and increased focus on infrastructure development has also resulted in increase in demand of electronic security equipments. Digitization of manual work by use of artificial intelligence, better scanning, reduced interference of manpower, remote access and surveillance, and reducing price with advancement and adoption of technology has helped the market in achieving positive growth.

By Region: Central region of Middle East is the biggest market for electronic security products accounting for the highest market share in 2017. Saudi Arabia witnessed the highest sales of electronic security equipments by value. It was swiftly followed by Northern where Turkey leads the market and Western part where Israel is the largest market. Heavy investments in infrastructure projects for diversification of economy and government regulations are the major reason behind the growth in the region. Long term plans for development of the economy is adopted by many Middle Eastern countries including UAE Vision 2021, Saudi Arabia 2030, Kuwait 2035 and similar programs which are key drivers for demand of electronic security in their respective countries.

By Type: The market is dominated by monitoring and video surveillance systems as it acquire highest sales value of the total share in the electronic security market. The market is further categorized into video surveillance, access control and intrusion detection systems. Video surveillance has majority share and is largely dominated by high definition IP cameras. Recording facility from 24 hours to 6 months service and recording of other attributes for video analytics are sold at premium. Restricted entry systems which constitutes significant share in the electronic security market are mostly installed by manned guarding companies and the technological advancement and adoption is slow as compared to monitoring surveillance systems. The restricted entry system was further segmented into various constituents, which includes traffic barriers and accessories, Walk through metal detectors and baggage detectors, Turnstiles and electronic gates, automated doors, gates, garage doors and shutters, and automated retractable traffic bollards.

The manufacturers of electronic security in Middle East sell their products to end users through distributors and system integrators. The report focuses on discussing the competitiveness of both major manufacturers as well as system integrators present in the market. The market is dominated by major global players although entrance of some other players especially from China has resulted in change in market dynamics. Different countries have different leading players in each segment of technology. Major multinational companies are among the top players in each country and the demand for their technologically advanced and latest products is the key source for their revenue. Commoditized products see a large competition with presence of many leading and small players from across the globe.

The market for electronic security in the region is estimated to grow with rising demand from end users in both commercial and retail sector. This market is primarily driven by video monitoring surveillance which will acquire majority of market share. The market will primarily grow due to requirements of surveillance cameras which have been made necessary by the government in various countries. Among the regions, central and northern region will drive majority of demand from the market in the future. Usage of analytics in surveillance and monitoring and remote or wireless access control and intrusion detection will key value add that is expected drive the market in future.

For more information refer to below link:-