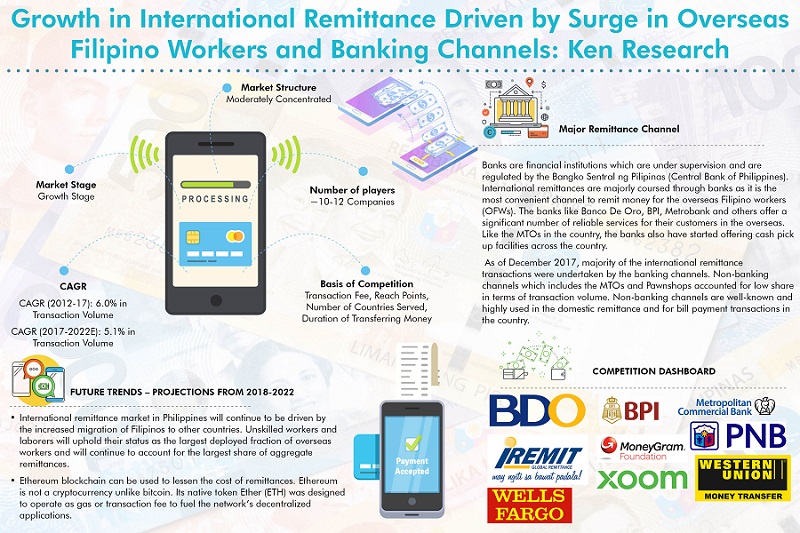 The report facilitate the readers with an in-depth analysis of the existing and future trends, issues and challenges prevalent in the industry and anticipated growth in the future depending upon changing industry dynamics in coming years. The report is useful for industry consultants, remittance service providers (MTOs), banks, local agents, payment platforms, pawnshops and other stakeholders to align their market centric strategies according to ongoing and expected trends in the future.

Philippines remittance market is led by the international remittances and domestic remittances which are represented by the OFW remittance inflow, the internal migrant’s transfers. During 2012-2017, the international and domestic remittance markets have showcased a remarkable growth. The Overseas Filipino Workers (OFWs) space has been the most important source of growth in the Philippines economy. The majority of the OFWs primarily originate from the Cavite, Laguna, Batangas, Rizal and Quezon (CALABARZON) region, and the peripheral regions of Central Luzon and Metro Manila. Market growth can be attributed to factors like increasing number of OFWs, growing infrastructure and developmental activities, rising business sectors and increasing job opportunities within the country, surging BPO sector and other related factors.

The market for domestic money transfers in the Philippines is exceedingly dynamic and has been maturing since the past decade. Domestic money transfers encompass both remote money remittances and payment of bills. The choice of the service provider, to a greater degree, has been dependent upon the amount of money being transferred. Bank transfers and major PSPs were mostly used in order to transfer large amounts of money.

In-country Filipinos, characterized by domestic migrants who have moved for better economic and employment opportunities and permanent residents together, accounted for major share of the total domestic remittances. Additionally, majority of the overall domestic remittances was funded by people/families who have also received international remittances from Filipinos in other countries. Domestic remittances were observed to be transferred in top cities amongst the provinces included Quezon City, Manila, Makati, Caloocan, Paranaque, Pasig, Mandaluyong, Taguig, Pasay and Baguio.

Convenience stores such as 7-Eleven and Ministop are the major third party payment channels of the total bill payments in the Philippines in 2017. Owing to the greater reach and accessibility; convenience stores have dominated the bill payment landscape in the Philippines over the past many years. Bill payments through mobile and online platforms have displayed a tremendous growth over the past five years with growing mobile wallet and number of online methods offered by banks and other local players. The use of payment centers such as Bayad, along with banks, was mostly prevalent in the urban areas. Conversely, informal service providers were largely used in semi-urban and rural areas.

The Philippines remittance and bill payments market has witnessed a considerable growth in past five years. A noticeable amount of FDI inflows was invested in BPO, electronics and energy sector. With the continual growth in FDI flows in the BPO sector, there are expected to be more employment opportunities leading to large scale migrations to urban cities. Rapid growth in the introduction and use mobile technologies in the country for money transfer and bill payments are also a factor for future growth of domestic remittance and bill payments market of the Philippines.

The continued growth in internal migration is expected to sustain the growth of money transfers taking place in the Philippines. The Philippines has outshined India in terms of voice-based outsourced projects and has become the worldwide leader in the call center industry. Over the past six years, the BPO industry in the country has augmented at an average rate of 25%-30%. International remittance market in the Philippines will continue to be driven by the increasing deployment of Filipinos in other countries. Unskilled workers and laborers will uphold their status as the largest deployed fraction of overseas workers and will continue to account for the largest share of aggregate remittances.

For more information on the market research report please refer to the below link: